Rare early WW2 era huge bronze medal commemorating one of the early-war German Navy victories – Captain Lieutnant Günter Prien’s U-47 submarine Scapa Flow harbor sneak attack and the sinking of the battleship HMS Royal Oak and battlecruiser HMS Repulse on October 14, 1939 (Kienast reference #564). The sinking of HMS Repulse was later proven to be incorrect; she was sunk by the Japanese off the coast of Malaya two year later. This is the rare high relief 102-mm “large type” cast bronze medal that was sold in very small quantities. As the war progressed the German fortunes began to turn sour; making and selling commemorative medals kind fell out in Germany. Since not a lot of these huge medals were made to begin with and even fewer were actually sold, this type is VERY hard to find nowadays.

The medal retained its original mate finish; it is in pretty much “as-made” condition with a very attractive dark chocolate-brown patina. No typical rim nicks, dings, or scratches; AU Details grade due to a few light tool marks on obverse. Professionally  authenticated and graded by NGC – America’s leading numismatic grading service (NGC certification #4821242-006). This Karl Goetz 1939 U-47 Captain Gunter Prien bronze medal came out of an old collection assembled several decades ago. It might be many more years before a similar specimen becomes available for sale – don’t miss your chance!

Karl Goetz was born in Augsburg, Germany and studied in Leipzig, Berlin, Dusseldorf, Utrecht, Le Locle (Switzerland), and in Paris. With the start of WWI Karl Goetz became an artist known around the world for his 1914-1923 satirical medals. Overall, Goetz created about 180 satirical medals and close to 800 medals overall; all are very collectible and highly prized today. He also designed a series of pattern coins, tokens, and medals for the German Empire, the Weimar Republic, and the Third Reich Germany. Karl Goetz survived WW2 and died in his native Munich in 1950.

This rare Karl Goetz 1939 U-47 Captain Gunter Prien bronze medal is guaranteed to be genuine or your money back.  I have more Goetz medals, as well as military medals and badges on our Militaria Badges & Medals store section; please take a look. Argocoins now accepts all major credit cards and payments via PayPal as forms of payment. Please email us if you would like to make a credit card purchase over the phone. Old-fashioned checks and money orders will work as well; please take a look at the Payments section within our Terms and Conditions for additional details.

FREE USPS PRIORITY MAIL SHIPPING WITHIN THE U.S. FOR THIS ITEM

International shipping for this item will be $39.95 and up to most countries on our “ship-to” list. 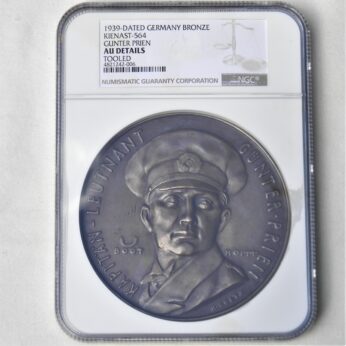