Scarce WW2 era German airborne units “Fallschirmjäger Messer” paratrooper knife in great overall condition – all original springs are intact; the blade is nice and tight. This late-war production “all-carbon-steel” Fallschirmjäger-Messer specimen is still in excellent working order. This specimen has the name Flügge inscribed on one of the grips in fine script. According to the owner, the knife was ID’s to Josef Flügge who was still serving in the Luftwaffe as a Hauptmann (Flight Lieutenant) as late as April 1945. I’m selling this item on a consignment; a reserve price has been set by the seller. According to the maker’s production code (R.B. No.) stamped on the base of the spike, this take-down Model 2 type was made by SMF (Solinger Metalwaffen Fabrik). This exact type, as well as earlier non-takedown Model 1 types are illustrated on pages 239-242 the excellent French reference book Knives and Daggers-Bayonets Used by the German Army During 1914-1945 by Christian Mary (see the book’s scans attached). These large Fallschirmjäger-Messer knives are pretty hard to find in original condition nowadays; see the dedicated German gravity knives page, courtesy of Wikipedia.

Developed in 1937, this type was originally issued to the German paratroopers as an emergency-assist knife which could be operated one-handed to cut entangled parachute cords, cut lines, untie paracords with the “marlin spike”, etc. Later in the war this type was issued to all Luftwaffe aircrews (WW2 German Airforce). In 1944 a number of FS knives were also issued to a Skijäger infantry regiment – “ski troops” operating in the northern Ukraine / central Belorussia forests. See a couple of rare WW2 era reference photos of German Skijägers on a winter patrol in the Ukrainian Pripyat region in 1944. One of the Skijägers clearly has a take-down Model 2 FS dangling off his belt (photos are for reference only and will not be included with the knife). A relatively small number of 350,000 Fallschirmjäger-Messer knives were produced in total by six different manufacturers; very few survived the war in decent condition. The knife was large enough, practical and reliable in the field; it was well-received by the airborne troops and it became a subject of envy to all the rest of the men in uniform.

This is a scarce late-war Solinger Metalwaffen Fabrik Model 2 specimen with all high-carbon steel (non-stainless) metal parts, including the blade. Early-war Model 1 non-takedown Fallschirmjäger-Messers were made from high-quality stainless steel. But by mid-war stainless steel was becoming scarce in Germany and most of the “non-essential” wartime production had to switch to “regular” high-carbon steel. Still, it wasn’t until late in the war when SMF had finally ran out of various stainless steel parts and had switched to all-carbon steel production. Soon thereafter the Allies had bombed the Solingen factories to smithereens, effectively ending all manufacturing until the war’s end. Late-war “all-carbon steel” production Fallschirmjäger-Messers are hard to find because there weren’t many of them manufactured in the first place.  This knife is about 6-1/8″ / 15.5 cm closed; the blade is about 4″ / 10.2 cm long. All metal parts are blued with about 80 to 95% of the original bluing remaining. The blade has been lightly sharpened; it is razor-sharp still; the tip is intact. Late-war carbon steel blade is unmarked, as intended. The blade comes out of the handle with a nice thud; opens and closes with no issues. Overall, this Germany WW2 Model 2 paratrooper knife is in excellent shape, considering the age. Heavy-duty marlin spike is about 3-3/4” / 9.5 cm; The base of the spike is sharply stamped with the late-war manufacturer’s identification number R.B. NR. 0/0561/0019 on one side and the standard “eagle 5” Luftwaffe proof mark on the other. The blade lock, the two-part non-stainless steel bolster, and the interior of the frame are correctly stamped with various production numbers. The knife could easily be taken apart for maintenance or a blade replacement; all internal parts are correctly marked with production numbers – see photos.

Original hardwood handle with 4 steel pins and the D-ring shackle on the pommel. The handle is in excellent overall condition, considering the age. A few minor scuff marks on wood handle scales are noted for accuracy; all handle parts are tight with no play. The internal blade spring is nice and tight; the spike holds well, original high-carbon steel shackle is intact – this type is rare this nice. After 80 plus years this original Germany WW2 SMF Model 2 paratrooper knife is still in very good shape, considering the age. Today most of the surviving German WW2 era Fallschirmjäger-Messer paratrooper knives are in private collections & rarely come up for sale; don’t miss your chance to add this rare late-war specimen to your collection!

This late-war Germany WW2 SMF Model 2 paratrooper knife Fallschirmjäger Messer is something that doesn’t come up for sale very often; don’t miss your chance to add it to your collection! Please check out our Collectable Blades and Militaria sections for a variety of custom-made and various WW1 and WW2 combat knives.

For collectible knives and edged weapons Argocoins accepts payments via credit cards, personal checks drawn from US-based accounts, certified US-based bank checks, and money orders. Take a look at the Payments section within our Terms and Conditions for mailing instructions and additional details. Please email me at info@argocoins.com if you would like to make a credit card purchase over the phone. Follow me on Facebook @argoman400BC to keep an eye on the latest additions and promotions.

No international shipping for this item, sorry lads. 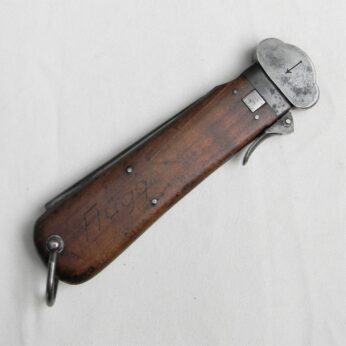