Very rare WW2 era fighting knife made during the war by San Antonio Iron Works in Texas, USA from the hilt part of WW1 era M1913 Cavalry Saber, typically referred to as the “Patton Sword”.  The original M1913 Calvary saber was developed by the now-famous General Patton prior to WW1. The sword was an excellent weapon but it was rendered useless by the advances in modern warfare by the time the United States has actually entered WW1. After the Great War ended most of the M1913 sabers ended up collecting dust in the government arsenals.

During the first couple of years of WW2 the US servicemen had no standard-issue fighting knife and the military was desperately looking for a quick way to  satisfy the demand for the much-needed fighting knives early in the War. So someone came up with the idea of re-purposing these old (and by than obsolete weapons anyway) info fighting knives and daggers. A large quantity of Patton Swords and even older Civil War sabers were converted into somewhat crude, but very practical fighting knives and trench daggers.  The “San Antonio” daggers and knives are some of the best known examples of such side arms.  Each M1913 saber was made into 3 fighting knives. Obviously, the “hilt part” fighters are scarcer than the rest. These intimidating “Patton Sword” fighters were made by a number of American makers during the war, including San Antonio Iron Works of San Antonio, TX. This exact type is illustrated on page 222 of the KNIVES OF THE UNITED STATES MILITARY WORLD WAR II book by Michael W Silvey – a well-established expert and the author of a number of books on the subject of the US military edged weapons (see book’s scans attached).

This huge fighting knife is about 14-1/8” / 36 cm overall; the blade is about 8” / 20.1 cm; the edge is very sharp still; the tip is a bit pitted but intact, which is something you you don’t see very often with this type.  The original M1913 Saber that this knife was converted from was manufactured by the famous Springfield Arsenal (SA) in 1914. The ricasso is stamped SA / 1914 / US “flaming bomb”  ordinance mark on one side,  arsenal serial number 21886 /  US on the other. The original M1913 handle scales are in excellent condition, considering the age – no cracks or chips on the plastic. The guard is solid; all handle parts are tight with no play.  Brown leather “long type” scabbard with the tooled floral pattern on the front is original to this fighter; the back is faintly signed with GI’s service number and the name. It looks like 36666914 Ray J. Pomnick Jr. but I’m not 100% sure; further research is needed. These original super-embossed leather San Antonio scabbards are actually scarcer than the knives themselves as they did not last as long as the knives in the field. Finding a complete set is not so easy nowadays. This scabbard is well-used but it’s in great shape, considering the age – all original stitching is intact; the leather is pretty supple still.

This original WW2 era Patton Sword fighting knife made by San Antonio Iron Works has not been cleaned or tampered with in any way, it is in 100% original “as is” condition. These are the actual photos; spent brass is not included with the lot 😉  I have several fighting knives made from converted sabers, as well as some scarce WW1 and WW2 fighting daggers and trench knives available for sale – please take a look in our Militaria section.

DOMESTIC USPS PRIORITY MAIL SHIPPING WITH SIGN-FOR DELIVERY CONFIRMATION WILL BE $14.75 FOR THIS ITEM 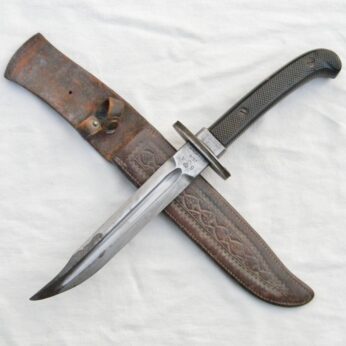