Scarce silvered bronze medal struck circa 1924 to commemorate the delivery of the newly-built German airship LZ 126 to America. Germany had built this airship for the United States as part of the WW1 reparations; once delivered, she was re-named USS Los Angeles (U.S. designation number ZR-3).

One of the largest airships of the time, USS Los Angeles had a crew of 40 (!!) men with the ship’s length at impressive 658′ / 200.7 meters and ship’s diameter at 90′ / 27.6 meters. It was the longest-serving US Navy airship on record. Unlike most of the large airships of the era, USS Los Angeles survived the inter-war years with no loss of life until she was decommissioned and dismantled in 1939.

Nice specimen in Proof condition with attractive light-gray patina; rare this nice. First captain-pilot Hugo Eckener portrait on obverse; the skyline of the American shore and legends on the obverse. The medal weighs about 13.8 grams, about 33.4 mm in diameter; plain rim.

This GERMANY airship LZ126 1924 medal is not a later reproduction or a copy; it is guaranteed to be 100% authentic or your money back. Not cleaned; these are the actual photos. We also have a rare 1924 “LZ126” specimen struck in .990 silver; please take a look Don’t miss your chance to add this attractive airship memorabilia to your collection!

We have more world coins, medals, and badges in our store; please take a look at similar listings within our Coins & Paper Money section.  We accept all major credit cards and payments via PayPal as forms of payment. Old-fashioned checks and money orders will work as well; please take a look at the Payments section within our Terms and Conditions for additional details. Follow me on Facebook @argoman400BC to keep an eye on the latest additions and promotions.

International shipping for this item will be $13.5 and up to most countries on our “ship-to” list. 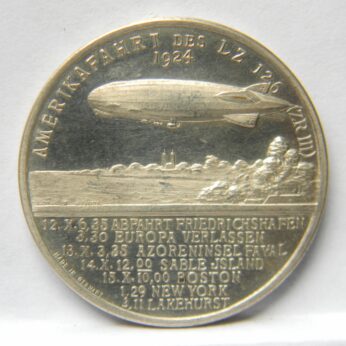 We at Argocoins stand firmly with the people of Ukraine against the Russian aggression. These are not empty words. 100% OF OUR PROFITS ARE DONATED for purchases of the much-needed cold-weather clothing, medkits, and other field gear for individual units of the Ukrainian Armed Forces. All sales to/deals with Russia are void forever. Слава Україні! Dismiss