Very rare original WW2 era Imperial Japanese Army 35 mm TYPE 10 SIGNAL PISTOL manufactured in circa 1930 by Tokyo Army Arsenal in Tokyo, Japan.  Adapted for the use by the Imperial Army in 1921, Type 10 is VERY hard to find Japanese flare gun as only about 8300 of these were made in total. In comparison, Japan made about 280,000 Nambu pistols before the war’s end, far more than the flare pistols.  All Japanese WW2 flare guns are hard to find now as most were discarded/lost in the field. Also, the American GIs would prefer “real firearms” for a trophy; only a few of these bulky flare pistols made it into the US as souvenirs after the war. It is safe to say that less than a quarter of the original Type 10 population survived, making it one of the hottest Japanese WW2 collectibles.

This is specimen is one of the early guns – serial number 2967 on the frame below the arsenal markings under the barrel; all visible serial numbers on various parts are matching; original blueing is mostly intact. The gun is only slightly used with some minor surface rust inside the barrel (clean your firearm after firing, damn it!!). Other than that, it’s in near-perfect overall condition, considering the age. The gun is mechanically excellent with crisp trigger action and an even pull; this is a double-action pistol. Metal parts have just a few minor surface rust spots; no dings or scratches; no damage to original wood grips – rare this nice.  This signal pistol is about 7-1/4” / 18.5 by 7″ / 18 cm cm overall; 35 mm flare barrel is about 4-3/4″ / 12 cm. All serial numbers are matching (2967 on the frame; 967 on the smaller parts).

Original lanyard ring is intact. This Type 10 has not been cleaned or tempered with; scarce in such authentic condition. A lot of these all-iron flare guns are rusted and pitted from exposure in the jungles; all the specimens I have seen before were wire-brushed or harshly cleaned and re-finished.

This WW2 Imperial Japan Type 10 Army flare gun is not a “firearm” under US law and needs no FFL to transfer or own. This WW-2 era flare gun is obsolete; its spare parts and flares are no longer made.

We have a few more WW2 era flare guns coming up for sale, plus several scarce WW2 fighting daggers and WW1 trench knives available for sale immediately – please take a look in our Militaria section.  This original WW2 Imperial Japan Type 10 Army flare gun has not been cleaned or tampered with in any way, 100% original “as is” condition; these are the actual photos; spent brass is not included with the lot 😉

We accept all major credit cards and payments via PayPal as forms of payment. Old-fashioned checks and money orders will work as well; please take a look at the Payments section within our Terms and Conditions for additional details.

NO INTERNATIONAL SHIPPING FOR THIS ITEM 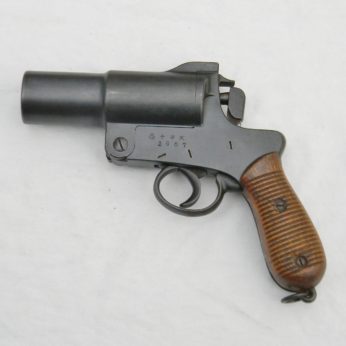