Classic WW2 era British “Fairbairn Sykes” fighting dagger with razor-sharp blade and original leather scabbard; this is FS’ 3rd pattern manufactured during the war. Originally designed as the “commando dagger” for the elite British special-ops forces, these “FS” fighting knives became super-popular with the British and American servicemen stationed in the UK during the war. The allied servicemen carried FS daggers in practically every combat theater in Europe, North Africa and in the Middle East. This exact type is illustrated on page 133 of the KNIVES OF THE UNITED STATES MILITARY WORLD WAR II book by Michael W Silvey – a well-established expert an author of many books on the subject of US military edged weapons (see the book’s page scan attached).

This dagger is only slightly used – better than average condition for the type. The blade appears to have an original edge; it’s razor-sharp still; needle-like tip is intact – VERY rare this nice. Grooved handle below the guard is stamped with British military acceptance “broad arrow” mark and letter “B“. Cast handle is marked with a small number “4” near the pommel. Typical domed bronze pommel and thick iron handguard; all parts are solid with no play. This dagger is about 11-5/8″ / 29.5 cm overall; the blade is about 7″ / 17.8 cm; original black finish is mostly intact; the edges have been gently sharpened; nothing harsh. Original dark-brown “sew-on” leather scabbard is in great shape; all stitching is intact; bronze tip is tight and secure. Don’t miss your chance to add this original WW2 British Fairbairn Sykes dagger to your collection!

This classic WW2 British Fairbairn Sykes dagger has not been cleaned or tampered with in any way, it is in 100% original “as is” condition. These are the actual photos; spent brass is not included with the lot 😉 We have a few more American WW2 era combat knives and bayonets, as well as several scarce WW1 and WW2 fighting daggers and trench knives from other countries available for sale – please take a look in our Militaria section.

We accept all major credit cards and payments via PayPal as forms of payment. Old-fashioned checks and money orders will work as well; please take a look at the Payments section within our Terms and Conditions for additional details. 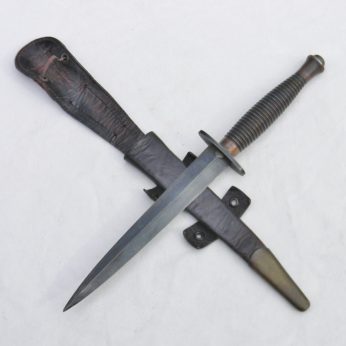