Very rare WW2 era fighting knife made during the war by Andeson in Glendale, CA, USA from the hilt part of WW1 era M1913 Cavalry Saber, typically referred to as the “Patton Sword”.  The original M1913 Calvary saber was developed by the now-famous General Patton prior to WW1. The sword was an excellent weapon but it was rendered useless by the advances in modern warfare by the time the United States has actually entered WW1. After the Great War ended most of the M1913 sabers ended up collecting dust in the government arsenals.

During the first couple of years of WW2 the US servicemen had no standard-issue fighting knife and the military was desperately looking for a quick way to  satisfy the demand for the much-needed fighting knives early in the War. So someone came up with the idea of re-purposing these old (and by than obsolete weapons anyway) info fighting knives and daggers. A large quantity of Patton Swords and even older Civil War sabers were converted into somewhat crude, but very practical fighting knives and trench daggers.  Each M1913 saber was made into 3 fighting knives. Obviously, the “hilt part” fighters are more scarce than the rest. These intimidating “Patton Sword” fighters were made by a number of American makers during the war, including Andeson of Glendale, California. This exact type is illustrated on pages 50-53 of the KNIVES OF THE UNITED STATES MILITARY WORLD WAR II book by Michael W Silvey – a well-established expert and the author of a number of books on the subject of the US military edged weapons (see book’s scans attached).

This fighting knife is about 11-7/8” / 30 cm overall; the blade is about 6-1/2” / 16.5 cm; the edge is very sharp still; the tip is intact but shows some old pitting that had been polished-away. The original M1913 Saber that this knife was converted from was manufactured by Landers Frary & Clark (L.F.&C) in 1918. The ricasso is stamped L.F.&C. / 1918 / US “flaming bomb”  ordinance mark on one side,  serial number 3885 /  N0. 13 “screaming eagle” arsenal acceptance mark on the other. Letters US above the serial have mostly been erased during the sharpening process. The original classic Anderson “bloody red” cast plastic handle is in excellent condition, considering the age – there are no cracks, dings, or chips on the plastic; the handle is tight with no play.  A few minor scuff marks are noted for accuracy. The scabbard is WW2 contemporary but it’s not original to this fighter. It looks like a scabbard for the Mark 2 fighting knife issued circa 1942-1943, before leather scabbards were phased away in favor of more durable composition scabbards. In any event, this scabbard fits the blade well; the keeper is nice and tight;  all original stitching and staples are intact.

This WW2 ANDERSON fighting knife made from the WW1 era M1913 Cavalry Saber is a great find – today most of the surviving WW2 Anderson fighting daggers are in private collections and are off the market. This is one of the best WW2 era “non-regulation” US fighting knives with a lot of character and in excellent overall condition, you will not be disappointed!

This WW2 Anderson fighting knife has not been cleaned or tampered with in any way, it is in 100% original “as is” condition; these are the actual photos. I have several fighting knives made from converted sabers, as well as some scarce WW1 and WW2 fighting daggers and trench knives available for sale – please take a look in our Militaria section.

USPS PRIORITY MAIL SHIPPING WITHIN THE U.S. WITH SIGN-FORE DELIVERY CONFIRMATION WILL BE $14.75 FOR THIS ITEM 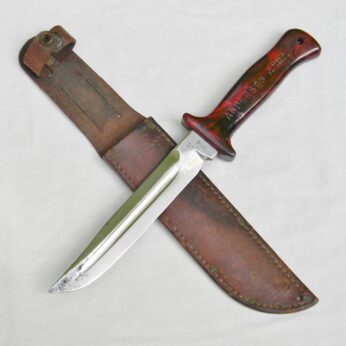