Very rare WW-2 era fighting knife / trench dagger made from the hilt part of the WW1 era M1913 Cavalry Saber, aka the “Patton sword”. This specimen was originally made by Landers, Frary & Clark in New Britain, Connecticut 1918  – L.F & C. above the date stamp. Some of these “Patton Sword fighting knives” were made under a contract for Uncle Sam during the war and a few more were made by some unknown makers using M1913 Calvary Sabers and even Civil War era swords. This “Patton Sword fighting knife” type is illustrated on page 231 of the KNIVES OF THE UNITED STATES MILITARY WORLD WAR II book by Michael W Silvey – a well-established expert and the author of a number of books on the subject of the US military edged weapons.

Finely-shaped fullered blade is about 6-5/8” / 17 cm; the knife about 10-7/8” / 27.7 cm overall; the edge is near-perfect with no nicks or chips, the tip is a bit rounded. Stacked Plexiglas, aluminum, brass, and black-n-red Bakelite handle with aluminum fittings is in great overall condition; all parts are tight with no play. An unusual wide double hilt was cut from a solid chunk of aluminum and expertly fit onto the blade.  L.F & C. / 1918 on ricasso on one side; U.S. and “screaming chicken” stamp / No. 12 on the other -a rare M1913 blade without a serial number.  Hand-made leather scabbard has a few stiches holding up the tip – obviously a field-expediter repair; the keeper is a former wrist watch band, a nice touch. The leather is relatively supple; it’s in very good overall condition, considering the age.

We have several scarce WW2 fighting daggers and WW1 trench knives available for sale – please take a look in our Militaria section.  This rare knife has not been cleaned or tampered with in any way, 100% original condition; these are the actual photos; spent brass is not included with the lot 😉 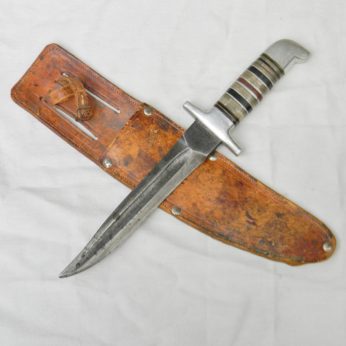