Rare Karl Goetz medal commemorating the heroic life and death of the famous German air force ace Baron Manfred Albrecht Freiherr von Richthofen or simply the “Red Baron”, as most people know him today. Manfred Richthofen was the finest airman the world has ever seen at the time. He was not only a good and super-effective fighter, but also the noblest of all airmen on any of the sides. He had the reputation of never killing an enemy after he had him “cold.” After forcing an opponent down he often landed beside him, helped him from his plane, and saw that he was honorably treated. The men of Richthofen’s famed Flying Circus acted with the same humanitarian and chivalrous nobility. When Richthofen himself was killed in auction, his former foes had given him a full military funeral with the final rifle salute, as accorded to a war hero. Manfred von Richthofen was and still is considered among the foremost heroes of the German fatherland.

This Germany KARL GOETZ 1918 Manfred Richthofen Red Baron silver medal is sharply struck in silver with high relief and antique mate finish (Kienast reference #288). Scarce Almost Uncirculated condition with very attractive golden-gray patina, this specimen has an excellent eye appeal.  The medal is expertly done in the unique Karl Goetz artistic style; the rim is marked Bayer. Hauptmunzampt. Feinsilber (Bavarian Head Coinage Office. Fine Silver). The obverse bears an excellent depiction of the Red Baron dressed in his jaunty German field cap and the greatcoat that he was so often seen in with the highly coveted Prussian order Pour le Mérite (aka The Blue Max). The reverse shows Richthofen’s family coat of arms and the headstone his KIA date – April 21, 1918. An arrow piercing the figure ‘80’ signifying the number of Red Baron’s air combat victories (although some historians claim that he actually downed over 100 enemy aircraft). VERY attractive dark-gray patina with purple overtones; weights about 19.7 grams, 36 mm in diameter.

The Red Baron medal is one of the most popular Karl Goetz’s creations, it is very collectible and highly though-after. Karl Goetz was born in Augsburg, Germany and studied in Leipzig, Berlin, Dusseldorf, Utrecht, Le Locle (Switzerland), and in Paris. With the start of WW-I Karl Goetz became an artist known around the world for his 1914-1923 satirical medals. Overall, Goetz created about 180 satirical medals and close to 800 medals overall; all are very collectible and highly prized today. He also designed a series of pattern coins, tokens and medals for the German Empire, the Weimar Republic, and the Third Reich Germany. Karl Goetz survived WW2 and died in his native Munich in 1950.

We have another “Red Baron” medal by Karl Goetz in even better condition – authenticated and graded MS63 by NGC – just 1 out of 4 MS63 medals with only 2 graded higher! Please take a look and remember – you can always verify the authenticity on NGC website by entering the medal’s NGC certification number.

A lot of later reproductions of this medal have flooded the market recently; buy with confidence known this KARL GOETZ 1918 Manfred Richthofen Red Baron K-288 silver medal is guaranteed to be 100% authentic or your money back.  We have more medals and badges on our Militaria Badges & Medals store section; please take a look. 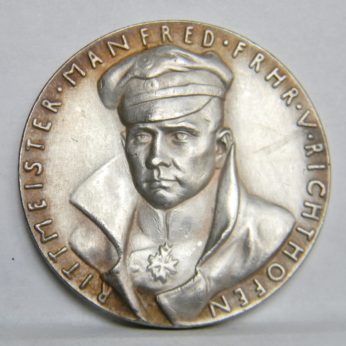