France M1833 French Naval Dirk originally manufactured for the Navy in the 1830th from old M1822 socket bayonets; only 23,931 made. During WW1 re-issued to the Army as the Trench Dagger; excellent overall condition, considering the age. FREE SHIPPING within the U.S. for this item.

France M1833 French Naval Dirk originally manufactured for the Navy in the 1830th from old M1822 socket bayonets; only 23,931 made. During WW1 re-issued to the Army as the Trench Dagger. VERY rare and important WW1-related dagger in excellent condition, considering the age.

Now this is something you don’s see every day – a rare 19th century official-issue French M1833 Naval Dirk – this type was assigned to the boarding parties during the by-gone era of the tall ships.  According to the French Navy nomenclature, 200 of these dirks were issued to the crews on each capital ship.  Originally manufactured in the 1830th by Manufacture d’armes de Châtellerault by converting obsolete M1822 socket bayonets; only 23931 M1833 dirks were made in total. The brass guard is stamped with the factory stamp on the top and the French Navy “anchor” acceptance mark on the bottom side. With the introduction of steam ships and advances in naval gunnery most of the naval edged weapons became obsolete and were shelved.

When World War 1 broke out it became apparent that the French Army was in dire need of a fighting knife for the close-quarters trench warfare, where the traditional bayonets and sabers were simply no up to the task. So, in October 1915, as the “stop-gap” measure the French issued the last 10,500 M1833 Naval dirks remaining in storage to the French infantry bogged-down in the nightmarish trench warfare of WW1.  Most of these “re-issued trench daggers” were used as intended; some contemporary WW1 memoirs had documented that some of the French troops would actually discarded these daggers fearing an execution by the German troops if captured with such a weapon. Either way, very few original M1833 dirks had survived the world wars; even fewer are in such great shape as this specimen.

This dirk is about 12″ / 30.5 cm overall; the blade is about 6-3/4″ / 17 cm long; the base is stamped wit a small stamp which looks like number 1 inside the circle but it’s pretty hard to read. The marking on the brass guard are nice and clear.  The dagger is in excellent overall condition, considering the age; all handle parts are solid with no play; the tip is intact. There is no scabbard. Original wood handle was about 90% of the original black paint remaining; iron D-ring on the pommel is intact – VERY rare this nice and complete.

I have a small but very interesting collection of various edged WW1 and WW2 era weapons to sell. Don’t forget to check out our Militaria section for other WW1 and WW2 era combat knives, including German WW1 era trench knives, vintage USAF WW2 Pilot Knives and a couple of rare WW2 “OSS Drop” knives we offer for sale.

Argocoins accepts all major credit cards and payments via PayPal as forms of payment. Old-fashioned checks and money orders will work as well; please take a look at the Payments section within our Terms and Conditions for additional details. Follow me on Facebook @argoman400BC to keep an eye on the latest additions and promotions.

FREE USPS PRIORITY MAIL SHIPPING WITHIN THE U.S. FOR THIS ITEM

This item can not be shipped to Germany or Japan, sorry. International shipping for this item will be $55 and up to the rest of the countries on our “ship-to” list. 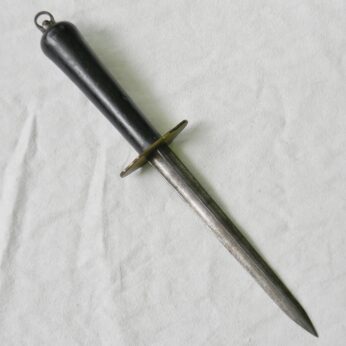