Scarce gold coinage of the Grand Duchy of Finland, Alexander II era – 1881 10 Markkaa in Almost Uncirculated condition with some mint luster remaining. About 18.9 mm in diameter, weights 3.23 grams; reeded edge. Year 1881 is the second lowest mintage in the series with only 100,000 coins struck; rare in any shape or form today.  Large quantities of Russian Imperial gold were repeatedly melted down or traded in after WW1; only a fraction of the original mintage survives today.

ABSOLUTELY NO SALES AND/OR SHIPPING TO RUSSIA AS OF MARCH 1, 2014! 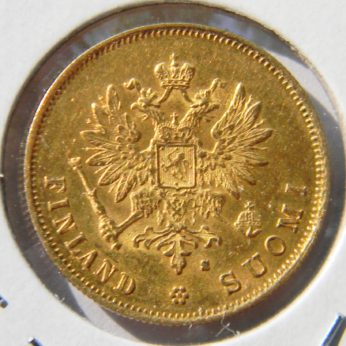